Elaine has been in the media a lot this year, from blogs to magazines to the latest, the Peoria Journal Star article below. Its about a fashion show we did last weekend. We have some great pictures on the way that I’ll post soon, there’s a teaser below the article.

The Peoria Art Guild’s June 28 event “Urban Underground” will celebrate a variety of cutting-edge art forms, including graffiti and urban-pop music. But one medium being showcased has much older origins — chain mail.

“I really feel like I’m working with an ancient material, but I’m doing a contemporary thing,” said artist Elaine Unzicker during a recent telephone interview from her home in Ojai, Calif. “I’m referencing the past, but bringing it forward to the future.”

Unzicker creates wearable items, from jewelry to tops, belts, scarfs and dresses, in stainless steel chain mail. Some pieces are decorated with brightly-colored anodized aluminum details. Her unique and modern creations are priced from $200 to $4,500.

“I’m making brand new pieces for this show,” she said. “They said they will give me 10 models, and that’s a great opportunity for me.” Unzicker has participated in style shows before, but she’s never done one solo. The opportunity was too good to pass up, but Unzicker was happy to come to Peoria for another reason. She grew up in Champaign and attended college at Illinois State University in Bloomington-Normal. The trip will give her a chance to catch up with friends and family.

Unzicker’s style show will be at 2 p.m. It’s just one part of the four-hour event exploring urban culture and metropolitan matters, from urban decay to revitalization trends, including one happening right around the Peoria Art Guild building. The Warehouse District Tiger II project is scheduled for completion around the time of “Urban Underground,” something worth celebrating since the street and sidewalk construction project made getting to the guild difficult. Access will be much easier for the event, and all surrounding parking lots should be open, said Brynn Kanikula, the guild’s special events and marketing manager.

The event is designed to celebrate the urban setting of the guild, which is in the heart of the Warehouse district. Forty visual artists, both local and national, will participate, filling three floors of the Art Guild building and spilling out onto the newly renovated Washington and Harrison streets. Among them will be Kim Ladd, of Peoria, who will show photographs exploring urban decay in Peoria; Deborah Paul, of Seattle, who makes wearable pieces from recycled items like tin and bicycle inner tubes; and Sara Drower, of Wilmette, who photographs street art around the world.

The art of urban music also will be showcased during the event. Two DJs, Real Juicy, from Peoria, and Veitamin, from St. Louis, will do live spinning and urban-pop track mixing. And a local skateboard group called Urban Punk Sk8 will demonstrate their skills while promoting a drug-free lifestyle. 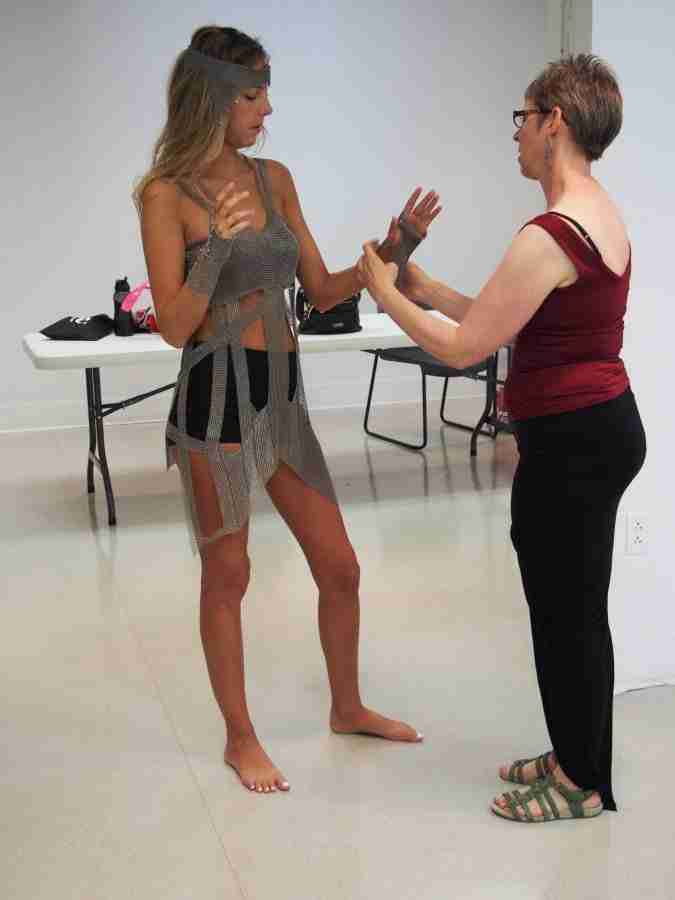 Elaine dressing Channel Hermann, one of our models for the show